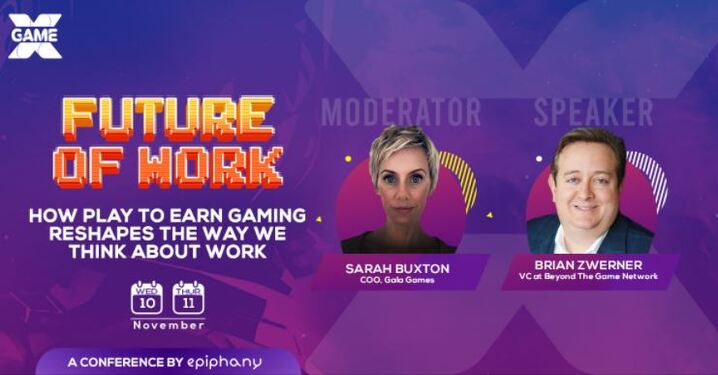 How Play to Earn Gaming Reshapes the Future of Work

With NFT as the new talk of the town, and how blockchain in gaming and in-game micro-purchases have evolved in time, it was much needed to hold a conversation regarding this comprehensive topic at Game X Conference 2021 organized by Epiphany. Brian Zwerner, Venture Capital Investor at Beyond the Game Network was the esteemed speaker and Sarah Buxton, COO Gala Games as the moderator.

Brian initiated the conversation by talking about the revolution in blockchain gaming where you can buy, sell and use the assets purchased/earnt within a game space. Talking about the free to play games that account for 85% of the game revenue generated in the industry, Sarah went onto ask that at what predominantly occupies blockchain gaming today i.e. investors or gamers to which Brian said a lot of free to play games will emerge in blockchain that will not impact gameplay and have low entry barriers.

Brian further dived into the conversation and highlighted that play2win and play-to-earn gaming are still in the pre-developing stage as developed economies might not feel stimulated to play games with $20 earning per game. He mentioned about some mind-blowing game ideas that involve gambling real assets like a car etc. and this creates an opportunity earn thousands of dollars. He mentioned how AAA game companies have yet to explore blockchain gaming to unveil a massive potential in market. He stressed upon hiring game architects, designers etc. to develop a blockchain game and how play2earn games need to expand into “buying pieces of land in a supernatural world suppose a mall through a gameplay and selling or using that digital asset for future gains”

The idea is ballistic and unreal but the digital space is absolutely scalable. He concluded the chat by mentioning his year-end plans about digital wellness programs and NFT events.

To learn more about the environmentally sustainable blockchain watch the full conversation at our YouTube Channel.