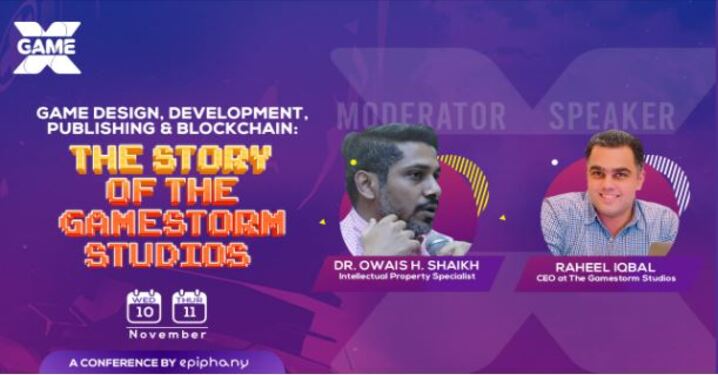 The Story of the Game Storm Studios regarding Game Development, Publishing & Block Chain?

When we talk about game design, game development and blockchain what we really want to know about is the inside-out of a game studio that entails the entire story. For the very same reason, this panel discussion was held at Game X Conference 2021, organized by Epiphany that included Raheel Iqbal CEO at Gamestorm Studios and Dr. Owais Shaikh – Intellectual Property Specialist.

Raheel started the discussion by mentioning the struggles he faced during the start when gaming was a new concept and providing instructions to designers was a dilemma. Fast Forwarding to 3D gaming where unity became popular and how training the developers and producing a monetizable game was the biggest challenge. He talked about how Gamestorm studios acquired games from multiple studios and publishers and after wisely spending on those games were able to increase its LTV through effective marketing. He further mentioned his aim of entering the NFT gaming market and being the first in Pakistan to do so, as it’s a new revolutionized model with 70% annual growth rate.

Talking about his farming game development where you can trade with friends within the game, he highlighted the “shift from play to earn game models towards create to earn models and how social games NFT enabled is the next big thing in the market”.

To watch the entire conversation on how NFT games can enter Pakistan Market and rock the industry click on our YouTube Channel.