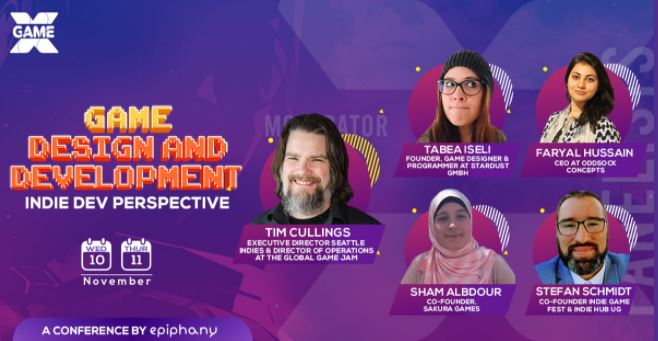 The panelists were inquired about what keeps them going in-game industry from an indie perspective, Stephen mentioned it’s the creativity and how indie developers bring fresh ideas on the table. Faryal mentioned how AAA Games and her team inspires her daily to keep working in this sector. Tabea mentioned her nerdy interest in science as the core inspiration in the game’s world. The panelists exchanged their views on how Covid and remote working impacted their productivity to which Faryal mentioned adopting a hybrid working culture with some of the expert artists working remotely & flexibly whilst Stephen spoke about the lack of game visibility online platforms during the pandemic that caused huge problems.

When asked about the challenges they faced as indie developers and advice they would heed to those in a similar situation Tabea was quick to mention that patience is extremely important to grow, learn and succeed in this industry. Sham talked about the Arabic language as a limiting factor the development of her game as there was not a lot of Arabic game content online to begin with whereas Stephen mentioned the rapidly changing game industry trends and for Faryal opening her own studio was the biggest daunting task.

Concluding the discussion Tim asked the panelists a quick tip on how to be a successful indie developer to which Sham mentioned that having a rudimentary knowledge of game mechanics is enough to start out as an indie developer and the rest of the learning can happen along the way, Stephan, on the other hand, talked about the importance of networking as this can built relations and opportunities. Faryal pointed out how passion can fuel your motivation to develop unique games whilst Tabea mentioned how asking help from other mentors can be a game-changer for indie developers.

To watch the entire conversation click on the link below.