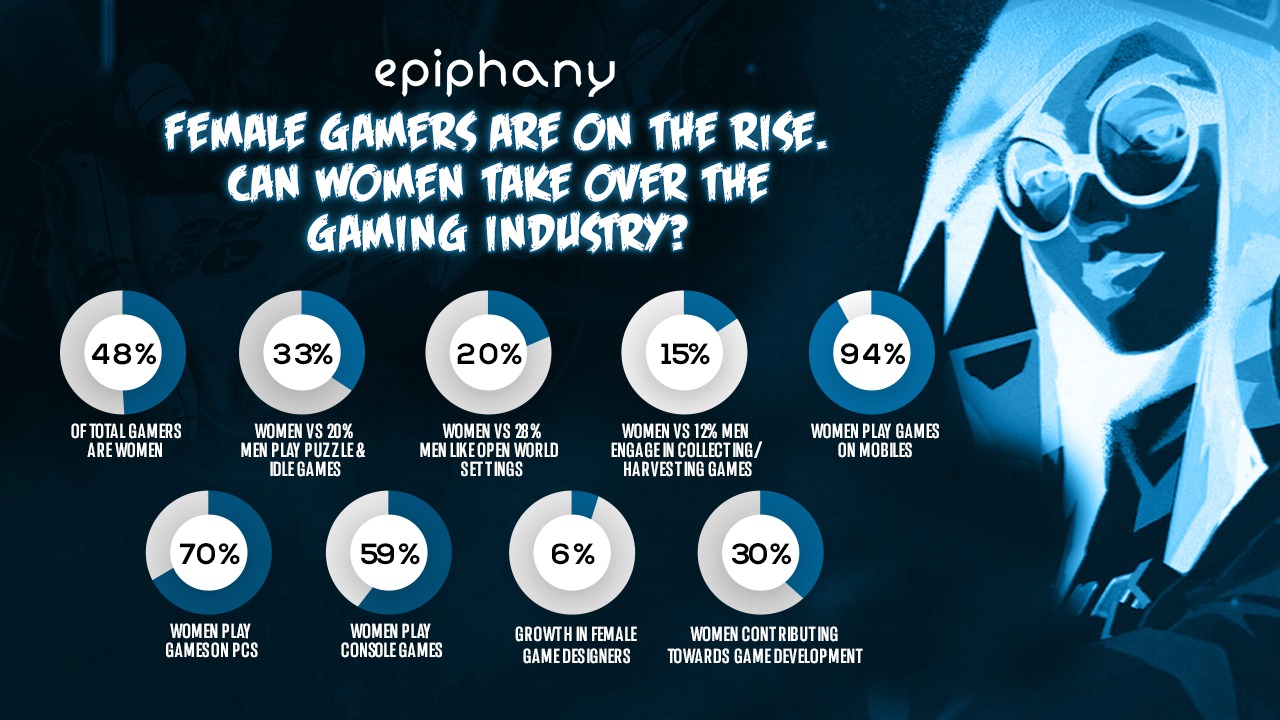 Female Gamers are on the Rise. Can Women take over the Gaming Industry?

Did you know that almost half i.e. 48% of the total gamers constitute women?

Women now make up to 40-45% of the Asian gaming population according to Google. When we talk about women’s games what do you exactly mean? Even though the current market statistics show that core gamers are evenly split between men and women yet women are stereotyped as casual gamers. Although 50% of women gamers play hyper-casual games more frequently than men, this still does not imply they are typically made for it. Let’s dive deeper and see the actual figures and game motivation in females across cultures.

Women like to engage in all game genres but they are more active in puzzle-solving possibilities and idle games. The percentage of women VS men is 33% VS 20% in this scenario. On the other hand, men find open-world settings more appealing 28% compared to 20% of women. 15% of women like to engage in collecting/harvesting games compared to 12% of men. Game psychology and gender analysis is a real thing, and if we are able to extract the useful data that what drives women to play what kind of games. The games and publishing business will boom internationally by allowing game designers to create some extremely valuable games for women.

According to Forbes French female gamers look to challenge themselves; while French males look to games for coping with stress and for achieving success through competition.  Taiwanese gamer’s reveals that females play for achievement and social reasons, while males play to pass the time. In America, it seems female gamers play to engage socially and maintain relationships. Surprisingly 94% of women play games on mobile compared to 59% on console and 70% on standalone PCs.

Undoubtedly we need more representation of strong women in games art and design roles, and even though there is still female harassment and bullying in the gaming industry, there is an upward trend by 22% in the female workforce in the gaming world.

The female characters are somehow a debatable question as they are shown as “damsel in distress” but According to a 2021 survey reported in Games Industry Biz, “80% of women gamers were happy with the representation of women characters in AAA titles, with 91% happy with depictions of women in indie games.”

By targeting and supporting strong female characters in games, brands can reposition how women engage with and are perceived in the gaming industry as a whole – a win-win for women everywhere and something that can support the growing numbers of women in gaming industry leadership roles.

Also, women in gaming careers have boosted over the last 2 years with a 6% growth in female game designers with 30% of the women attributing in games development compared to 70% of men game developers.

Many companies like Ubisoft have announced the appointment of senior leaders in diversity and inclusion roles to accelerate their culture shift.  But we are still a long way to go in recognizing women’s in-game careers in an executive role. There is a need for a more inclusive gaming culture that empowers women and allows them creative freedom in their game development.