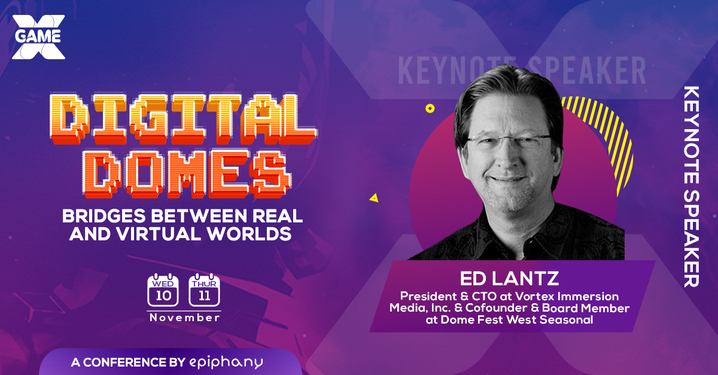 Metaverse and Digital Domes – Bridges between Real and Virtual Worlds?

With the metaverse creating a buzz in the gaming world especially after Facebook changed its name to Meta, the need to grasp the incomprehensible seemed important! Ed Lantz – CEO at Vortex Immersion Media Inc. a location-based immersive entertainment and metaverse applications expert shared his insights and experiences at Game X Conference 2021, organized by Epiphany.

He started off the discussion by sharing his interest in the metaverse & immersive field, how it all started from a mere curiosity of blending the power of storytelling with interactive gaming experiences and bringing it into a group immersive environment. He discussed how virtual reality (VR) as a part of mixed reality (MR) is so fantastic where the real world is replaced with synthetically generated sensory inputs pretty much as the Matrix Movie feels. Digital domes are spatially augmented reality where objects are brought into that universe and people experience and enjoy an immersive environment e.g. a digital concert.

Ed mentioned how he operated digital domes for a decade on Los Angeles Center Studios in downtown LA where the goal of using these domes is portals into the virtual worlds! He went ahead to mention how his Digital Dome Film Festival showcased 32 movies in an immersive cinema and people were hooked to it!

He mentioned a few big immersive companies that provide digital dome theater experiences including COSM, MSG Sphere, and Wisedome Art Park. He even talked about his recent work “Burning Man” festival that encourages the use of large-scale art, art installations, and cosplay. Also, a book that came out “The Scene that Became Cities” expertly entwines art and world-building as focal points.

He discussed dome casting where the real world meets the virtual world, by putting up satellite domes even multiple domes casting for live shows and corporate events.